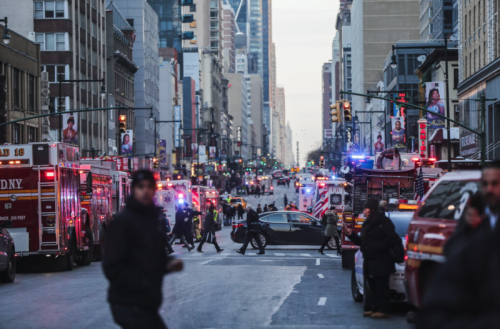 MANHATTAN, NEW YORK — A 27-year-old man set off a pipe bomb attached to his body during the morning rush hour on Monday, at New York City’s main bus terminal, the police said.

The blast echoed through the subway tunnels just off Times Square and filled parts of the Port Authority Bus Terminal with smoke as commuters fled into the streets to escape what the authorities quickly concluded was an act of terror.

“Terrorists won’t win,” Mayor Bill de Blasio said after the blast in Manhattan during the morning rush hour on Monday.

The suspect, named as Akayed Ullah, 27, was wounded when a “low-tech explosive device” blew up in an underpass, officials say. He is being held now. However, while he initially talked to investigators shortly after the attack, it was not immediately clear whether he had told them that he intended to kill himself, according to a police official who declined to be identified because the investigation was continuing.

A photo circulating on social media shows a man, said to be Akayed Ullah, lying on the ground with his clothes ripped and wounds on his upper body.
Mayor De Blasio said he was believed to have acted alone. Police quoted by US media say he is an immigrant from Bangladesh and lives in the New York borough of Brooklyn.

About the Attacker
New York Governor Andrew Cuomo said: “This is New York. The reality is that we are a target by many who would like to make a statement against democracy, against freedom”.

“We have the Statue of Liberty in our harbor and that makes us an international target.”

Nearby subway stations were evacuated, and the Port Authority Bus Terminal temporarily shut.
In addition, it is the biggest and busiest bus terminal in the world, serving more than 65 million people a year.

The authorities were searching Mr. Ullah’s residence in the Ocean Parkway neighborhood, pursuant to a federal warrant, one law enforcement official said. While no formal announcement had been made, both federal and local law enforcement officials indicated that Mr. Ullah would be prosecuted in federal court in Manhattan by the office of the acting United States attorney for the Southern District of New York, Joon H. Kim. The attack is being investigated by the Joint Terrorism Task Force, which is made up largely of F.B.I. agents and New York detectives, along with investigators from a score of other federal, state and local law enforcement agencies.

The attack roiled commutes across the region. All subway lines were directed to skip 42nd Street stops, according to the Metropolitan Transportation Authority. By late morning, only the A, C, and E were still skipping the stop. The Port Authority was evacuated and reopened around 10:30 a.m.