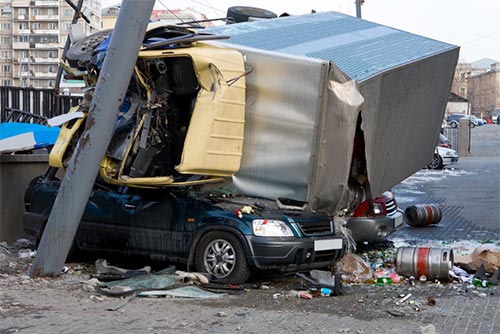 According to the California Highway Patrol the fiery crash left nine people injured. Two of the victims of the crash were critically injured.

The first call on the fiery crash was received at 9: 52 a.m. on northbound Highway 1, in the area of River Street.

According to CHP investigators the crash occurred when the fully loaded truck carrying clay from San Jose lost its brakes.

Apparently, it had a break failure, which resulted in collision with 20 different vehicles at a red light.

The initial investigation of the fatal crash reveals the brakes went out. As CHP Officer Grant Boles reported, witnesses saw the tires smoking on the vehicle.

There were numerous injuries reported, two of which were critical. The victims were taken to the local hospital.

The big rig eventually stopped after hitting vehicles and running off the roadway for about 1000 feet.

Boles assume the brake failure for big rig truck is not uncommon, however, the truck driver was out of control and was commuting 40 to 50 miles an hour.

After the crash the northbound lanes of Highway 1 got closed immediately. The lanes remained closed for over five hours.

All the victims of the crash , including the driver , who was pulled out of the burning car, are expected to recover.