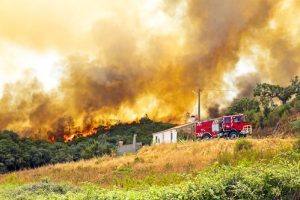 IDYLLWILD, California — On Thursday morning, firefighters in the Idyllwild area continued to battle a 4,700-acre brush fire that erupted the previous day and spread quickly, destroying 5 homes and prompting Gov. Jerry Brown to declare a state of emergency.

As part of the declaration, Brown ordered California’s Office of Emergency Services to provide government assistance to Riverside County and suspended a one-week waiting period for unemployment insurance benefits for those unemployed because of the Cranston Fire.

The blaze happened at noon Wednesday as the result of arson, according to authorities. A Temecula man, 32-year-old Brandon N. McGlover, was later arrested and booked on five counts for allegedly igniting several fires in Riverside County. His bail was set at $1,000,000.

No injuries have been reported up to now.

Cal Fire Capt. Scott Visyak said fire crews will focus Thursday on the Apple Canyon area as well as Lake Hemet based on the predicted weather, the fuel loads and the terrain.

However, homeowners were determined to stay and take a stand against the flames.

The emergency personnel represented a slew of agencies, including Cal Fire, the Riverside and Los Angeles County fire departments and the San Bernardino National Forest agency.

They were assisted by fire-retardant drops from air tankers and a decrease in wind conditions in the area, but temperatures were expected to reach 91 degrees amid 57% humidity.

Insurrection 2021: What We Know About The January 6th Capitol Storming