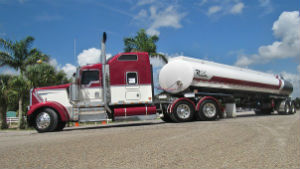 MARIN COUNTY, CALIFORNIA – A fuel tanker dumped roughly around 2,100 gallons of unleaded gasoline into an empty creek bed after it flipped over on Lucas Valley Road. This information comes courtesy of the California Highway Patrol on Monday.

How much it’ll cost to fix the damage and clean-up the sizeable spill is still unknown. Nevertheless, the incident is actively being investigated by the CHP Marin office. Additionally, the CHP’s Commercial and Environmental Crimes Unit and the California Department of Fish and Game, CHP Officer Andrew Barclay said.

“It is fair to say that the driver and company will be facing violations from all three investigations, although at this time I don’t have a specific list of those charges,” Barclay said.

Unfortunately, the driver opted to use the road despite a sign clearly stating that vehicles over 36 feet were not allowed. It so happens that his rig was 50 feet in length.

“In addition to the criminal side of the investigation, the company is also responsible for covering all costs… associated with the ongoing cleanup and environmental cleansing of the site,” Barclay said.

He also mentioned that the investigation could extend up to a couple of weeks. Definitely the charges won’t be announced to the general public until then.

The road was closed off during the evening, but local police partially re-opened it after 8 a.m. on Monday. At this point the tanker was taken from the road. Officials say it’ll take around a week to totally clean-up.

The San Rafael Fire Department is working in tandem with the hazardous materials unit in order to get the area cleaned up. Officials say the approach has transitioned from emergency response to now recovery and cleanup. As of now, the cost of cleaning up the spill is undetermined.