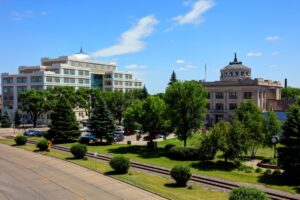 Some say that Grand Forks is the coldest city in the continental United States. Many people who live in Grand Forks consider themselves snowbirds. From late November to early April, North Dakota gets some of the worst winters in America. Many residents move south during these harsh winter months and return home each spring to enjoy some of the best summers in America. Grand Forks residents love their summers. There’s plenty of outdoor activities, with hiking trails, cycling, and many rivers. The city gets its name from the fork of the Red River of the North and the Red Lake River near downtown. However, in the winter season, Grand Forks becomes a traditional college town, with the University of North Dakota fueling the economy.

When the snow melts and the snowbirds return, there’s plenty to see in Grand Forks. The good weather kicks off with the Prime Steel Car Club’s annual car show every April. Many come from all over to showcase their engines and see some of the fastest and fanciest cars in the Dakotas. The Annual Rydell Car and Bike Show is another show that raises money for charity. It offers an even larger selection of motors with the inclusion of motorcycles.

If you’re a student moving to Grand Forks in the fall or a snowbird moving away in the winter, you’ll need a car shipping company to help with your move. For more than 16 years, Global Auto Transportation has been the go-to shipping company for Grand Forks residents. We offer more trailer options than any other company. We have open transport trailers to ship your daily driver and enclosed transport options to ship your classic car to the car show. Even if you need to ship a boat to enjoy the surrounding rivers and lakes, we have you covered.

Call us today at (888) 803-0501 to get the shipping process started today. Or go online for a free quote delivered instantly to your inbox.