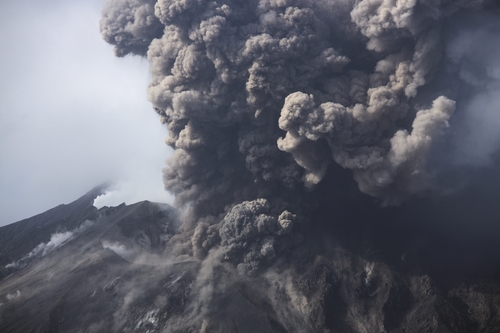 HAWAII — A volcanic eruption has spewed molten rock and hazardous gases from the ground in a small community on Hawaii’s Big Island, sending people fleeing from their homes as trees burn and the threat of more destruction is feared.

A giant cracks about 500 feet long formed directly in the lower-elevation neighborhood of Leilani Estates, which has a population of about 1,500. From the crack, lava was shooting like a fountain to heights of up to 100 feet, said U.S. Geological Survey volcanologist Wendy Stovall, an expert on Kilauea.

Residents of Leilani Estates and Lanipuna Gardens are ordered by authorities ordered to evacuate to two community centers, which are serving as shelters.

Leilani Estates resident Meija Stenback told local news that she left the area with her family. The eruption came after hundreds of earthquakes shook the eastern side of the Big Island over four days, and residents had been warned an eruption was possible.

“We knew it was coming, and even now it’s … really surreal at this point,” Stenback told.

Exposure to high levels of sulfur dioxide could be life-threatening, they added.

Kilauea is one of the world’s most active volcanoes. It’s in the Hawaii Volcanoes National Park, which has since closed off nearly 15,700 acres due to “the possibility of a new eruption and unstable geologic activity.” But most of the park remains open, it said in a statement.

Since Monday, hundreds of earthquakes — most of them around 2.0 magnitude — have been recorded in the area. The series of quakes came after a collapse of a crater floor of Puu Oo.

Since that collapse, about 250 earthquakes were reported in the area on Tuesday evening, according to a Hawaiian Volcano Observatory status report.

The tremors have jarred residents, who’ve been reporting nearly constant ground vibrations. They have also reported cracks in roads.

The US Geological Survey said the magnitude of the most severe quake ahead of the eruption was 5.0.