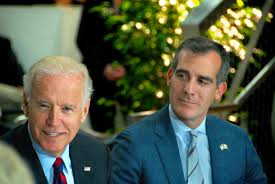 Similar to Biden’s challengers, Feinstein faced a primary challenger in 2018 running to her left politically. Kevin De Leon won enough votes in the primary to enter the general against Feinstein. Then he lost by 8 points. His momentum signalled a more progressive-leaning electorate in the state of California.

Garcetti courted the idea of a presidential bid in 2017, travelling to key primary states like Iowa and New Hampshire. However, in January of last year, he announced at City Hall he would remain in his office. Some suggest the issue of homelessness and its rise during his tenure as mayor would likely have sunk his ambitions for the highest office.

Now, Garcetti’s interest in the broader national stage amounts to support of another presidential candidate. “We need Joe Biden to bring our nation and world together during these most divided and dangerous times,” he said.

Joe Biden entered the race as a front-runner. Now, that status seems less secure. Polls put him neck and neck in California with Senator Bernie Sanders, the progressive front-runner in the field. Following closely behind the two of them is Senator Elizabeth Warren, all within 2 points of each other.

California contains 416 delegates, or nearly 10% of all delegates that vote at the Democratic National Convention to choose a candidate. Winning California proves a substantial victory in the greater race for the Democratic candidacy in the general election.

Californians vote earlier this year than in years past. Their primary vote takes place on March 3.

Omicron Variant Detected in U.S., but Early Reports are Positive