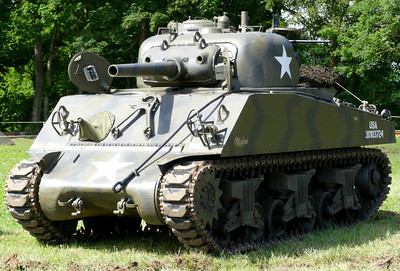 Tanks are cool. I mean, really cool. Of the coolest ones, the M4 Sherman, America’s tank during WW2 is the coolest.

After World War 1, America’s need for the industrial war machine came to a pretty abrupt halt. No more war meant no more development. At the time, the tanks deployed during the first war were underpowered and under-gunned on the American side of things. Albeit they served their purpose, most tanks that our soon-to-be-not buddy Germany, was developing harder, faster, and crazier tanks. By the time World War 2 came around, America was far behind in development. The issue was only exacerbated when we lost a good chunk of our naval fleet during Pearl Harbor. We had to drastically catch up.

The development of the M4 Sherman wasn’t an overnight success. It took a few steps beforehand to get to where we wanted to be. The M3 was a great start to the war effort, but it lacked in many different ways. The first was that the engine lacked the necessary torque to haul everything over the worst terrain. The second was that the turret was placed on the right side of the tank. In order to fire, they would have to expose the “soft-side” in order to get a clear shot. By the time all was said and done, the Germans had already made their target marked and fired. On top of the lacking mobility and firing range, the gun lacked the necessary firepower to dent the rapidly evolving Panzer 3 and 4 tanks. America was still trying to catch up.

Development of the M4 Sherman

After some overhauls and more effective engineering behind the curtain, the US developed the M4 Medium Tank. Nicknamed “The Sherman” after William Tecumseh Sherman ( one of the coolest generals during the American Civil War) Seriously, look him up. That guy was like “Hey war is bad. I don’t know why the Southern States want war so much. Well, I guess I’ll show them that war is bad.” Then he proceeded to do that by burning LITERALLY EVERYTHING IN HIS PATH for 285 miles. Yeah, they named our tank after that guy. I digress. The Sherman, albeit still underpowered in terms of firepower, was the exact tank America needed. Having a full-range turret, reflective “angular” body design (which would help deflect the huge rounds from both Panzer and even Tiger tanks) and an engine that could topple the largest of trees. After some development on the home-front, the tank was upgraded with a 70 mm cannon on the front. The tank became a quick-to-produce, cheap to make absolute powerhouse. These tanks went on to be a staple of American might and fought in every battle from the landing of Normandy, The Buldge, to Iwo-Jima, well into the end of the war.

Top 5 Dangerous States to Drive According to Truckers

Why Do Drivers Have To Annoy Truckers?