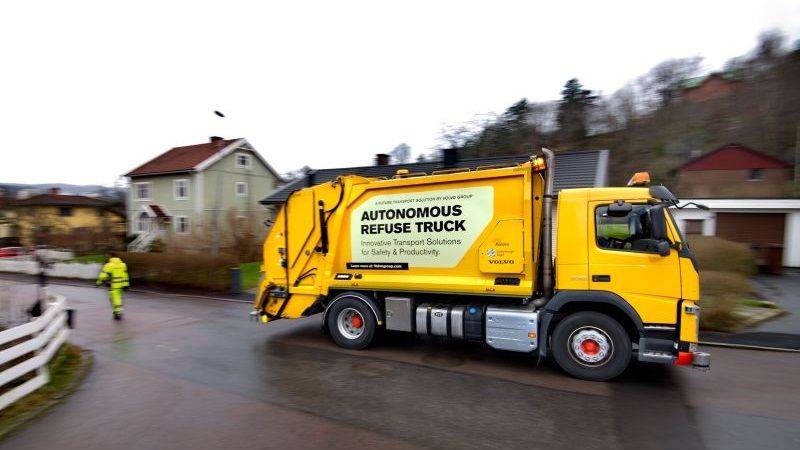 When it comes to autonomous vehicles, Volvo has kept busy. Starting from a project which allowed 100 motorists to test out a self-driving XC90 SUV in Gothenburg and ending with a self-driving garbage truck.

Renova, a waste management company, worked with Volvo in designing this truck. So, what is their goal? Well, there goal is to make a better working environment for drivers. The first time the truck travels to an area, it will be driven manually. This will then allow the automated system gathers mapping data through a suite of sensors of GPS technology. The next time around, Volvo says the truck knows where to head down to the garbage bin.

The interesting thing is that the truck drives in reverse while traveling along its route. Volvo says the driver heads to the rear of the ruck at the first stop, like what you’d on a typical trash day. When that’s done, the truck “automatically reverses” to the next bin upon the driver’s command, Volvo says, using its equipped GPS and LiDAR-based system for mapping, positioning and scanning the road. That allows the driver to he can have a full view of what’s happening out front.

“By reversing the truck, the driver can constantly remain close to the compactor unit instead of having to repeatedly walk between the rear and the cab every time the truck is on the move,” said Hans Zachrisson, strategic development manager at Renova, in a statement.

“And since the driver doesn’t have to climb in and out of the cab at every start and stop, there’s less risk of work related injuries such as strain on the knees and other joints.”

According to Volvo, the truck’s automated for control of steering, gear changing and speed, and it’ll come to an automatic stop if an obstacle on the road suddenly appears—though it wasn’t immediately clear what sort of objects it’s programmed to consider.

Volvo says the pilot will run through the end of this year, followed by an evaluation period. The plan, Volvo says, is to gauge how drivers, other motorists and residents feel about the trucks. Volvo says the trucks will be introduced in “varying degrees of automation,” depending on the environment.

Porsche Macan GTS 2022 Is Most Capable Of Showing Off