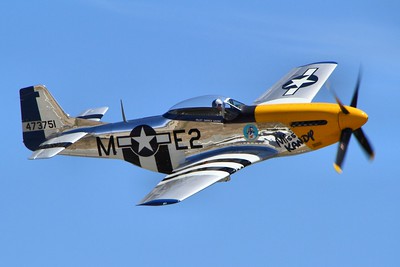 The P-51 Mustang is the result of American and British combined engineering. With the P-51’s development based in the US, and Brittain dropping in a V-12 Rolls Royce engine, this plane became the most feared fighter jet in the sky.

During early 1942, America still thought that mass waves of super fortress bombers had more than enough fire-power to defend themselves.  In the 26 operations flown to the end of 1942, the loss rate had been under 2%. The number was still low as this had proven an effective measure, but the game was going to change. American engineering was in the process of developing a single-engine escort plane. The goal was to have the same flight distance as a bomber. This (at the time) was thought to be impossible.

The P-51B was chosen in 1942 to be the premier “escort fighter” for round the clock bombing runs over West Germany. These small fighter jets would assist the super bombers to their destination and would force German fighter jets out of hiding. Once Germans found that a massive airforce was coming their way, they would take to the skies. This never seemed to end well for Germans. Although they were a formidable force, their casualties stacked up to outweigh ours.

After a number of successful bombing runs with the P-51 in escort, Ronald Harker (a test pilot for Rolls Royce) thought it would be a good idea to throw a Merlin-61 engine in the plane. This would help the Mustang fight at higher altitudes. This gave the power the mustang needed to be unmatched in the sky.

The Mustang became the staple of American might throughout WW2. It would go on to become the herald for bombing runs. They would successfully accomplish taking out airforce bases and high-priority targets.

We here at Global Auto Transportation respect and honor the men and women who serve our country. Our agents provide military transport shipping services and if you are a member of the military. We can provide effective discounts for military vehicle shipping! Speak with one of our agents today! We will be happy to tell you about how much you can save by shipping with us!