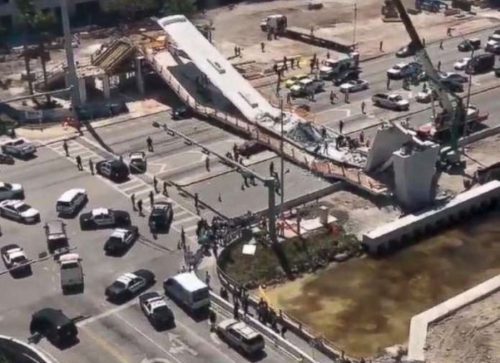 MIAMI, Florida– Multiple people have died because of a pedestrian bridge collapse at Florida International University in Miami, according to a spokesman with the Florida Highway Patrol.

“Several people were killed. I just don’t know how many,” Alejandro Camacho, a spokesman for the Florida Highway Patrol said.

There were at least five to six vehicles crushed underneath the pedestrian crosswalk, he added.

Students at FIU are currently on their spring break vacation, which runs from March 12 to March 17.

The bridge was just installed Saturday. According to a fact sheet about the bridge on FIU’s website, it cost $14.2 million to build and was funded as part of a $19.4 million grant from the US Department of Transportation. It was 174 feet (53 m) long and weighed 950 tons.

Florida Gov. Rick Scott is being briefed on the incident by the Miami-Dade County Police Chief Juan Perez, according to a schedule released by his office.