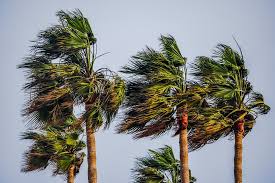 After a day of intense Santa Ana winds Monday, Southern Californian residents receive a second day of strong wind advisories. The mountain regions of San Gabriel and Santa Monica receive the strongest warning. Gusts of up to 70 mph are expected to blow through, potentially downing trees and branches.

In the midst of cleanup following yesterday’s winds, Santa Clarita faces another day of up to 55 mph gusts. Up to 60 mph winds may occur where terrain exacerbates windspeed.

Authorities advise drivers to be extra cautious. Strong winds on the freeway affect control of your vehicle. Also, downed trees and branches block roadways, or worse, may topple while you drive beneath them. The winds affect most major freeways, the 5, 101, 10, and 405 among them.

The Santa Ana winds result from cold air east of California in the Great Basin moving clockwise over the Sierra Nevada. They pick up speed through narrow mountain passes, then enter Southern California. This shifting air mass receives blame for wildfires as they dry brush in late fall. However, the Santa Ana winds are typically stronger in winter months, and with a shifting wet season, that may rewrite the dates on fire season.

FCC Bars China Telecom from Operating in the U.S.