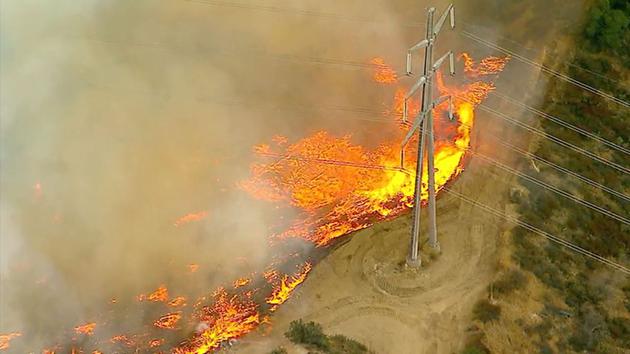 Los Angeles, Sun Valley – A brush fire is burning along the 210 Freeway in Sun Valley. The fire is threatening the homes near San Valley area. Fire officials are worried that dry and windy conditions can lead to quick growth.

According to fire officials, a change in the wind means that the fire has the possibility to rise to 2,000 acres after it flew the 210 Freeway. It was already assessed at more than 300 acres.

Homes near Tranquil Drive, Reverie Road as well as Inspiration Way were evacuated since the fire continues to grow.

Additional resources were sent to that neighborhood by firefighters for organizing structure safety, as well as, to help with evacuations.

Firefighters were concerned since a thunderstorm was moving into the territory. The thunderstorm can create hazardous downdrafts that can change the wind and create “unpredictable fire behavior.”

The first blaze was reported around 1:30 p.m. At first, firefighters thought they can easily handle the blaze. But then second fire sparked by high winds. The flames on both sides of 210 Freeway were burning.
By mid-afternoon, the temperature in the Sun Valley area was about 105 degrees.

Numerous fire agencies were sent to the blaze in the territory of the eastbound 210 La Tuna Canyon Road. Los Angeles County, Glendale fire as well as Los Angeles city and Angeles National Forest firefighters were engaged in fighting the blaze.

Fires Strike a Blow to the Anaheim Hills: At Least 10 Killed and More than 5000 Homes Evacuated