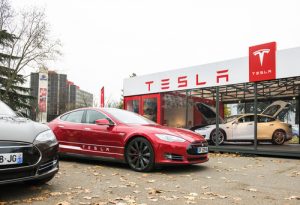 PARIS, FRANCE - NOVEMBER 29: Tesla Model S showroom and two luxury tesla cars outside and one inside. Tesla is an American company that designs, manufactures, and sells electric cars

Tesla has fired hundreds of employees in past week.

The dismissals were a result of a company-wide annual review of its more than 33,000 employees. The company did not provide specifics, Tesla said in an emailed statement.

The move comes as Tesla is aiming to rapidly enlarge production of its new mass-market Model 3. CEO Elon Musk said that the company would be making 5,000 cars per week by the end of the year, but that goal appears to be in danger amid early stumbles.

It was not clear whether any of the firings were connected to the manufacturing problems.

Musk acknowledged on October 6 that the company was facing “bottlenecks” in Model 3 production. He said Tesla was “diverting resources” to clear up the Model 3 production challenges, which was one factor in the company’s decision to delay its reveal of an electric semi – truck by about three weeks.

The company said in a Securities and Exchange Commission filing on Oct. 2 that “a handful” of its “manufacturing subsystems” have “taken longer to activate than expected.”