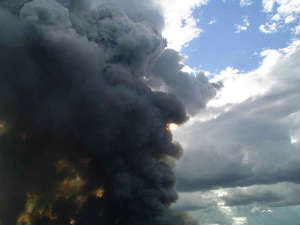 The incident occurred in the 200 block of West Slauson Avenue. Fire officials arrived in the area at around 7:45 a.m. right before the explosions began. Apparently, residents in the area called emergency personnel to report the strong scent of gas. This information comes from the Los Angeles Fire Department officials.

The force of the explosions broke a large manhole cover right in half.  This was east of Brentwood Street and Slauson Avenue. In addition, a house nearby caught on fire.

And, two women suffered injuries due to the truck’s explosion. One of the women received burns that covered 30% of her body. The other woman received glass cuts from the blast. Medical personnel transported both of the women to the hospital.

According to officials, multiple firefighters fought the flames for at least an hour and a half before the fire was out. And, according to Jaime Moore, the Los Angeles fire Assistant, the property owners claimed that they didn’t know the tanker truck was on the lot. Currently, the department is investigating. It is unclear if the tenant violated the city’s fire codes.

However, the explosion didn’t only impact those who were injured. Thirty people were forced to evacuate their homes. Apparently, both the American Red Cross and the LA Fire Department helped those families to find temporary housing.