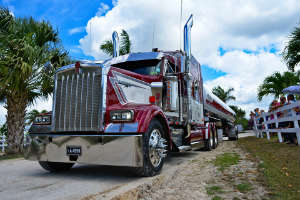 As much of the country stays at home to avoid the continued spread of covid-19, truckers maintain chains of supply across the US. Their work ensures grocery stores keep stocked, medical equipment makes it to healthcare providers, and essential goods remain available through the pandemic. As a show of appreciation, President Trump thanked truckers for their dedication.

Emerging from the White House, Trump delivered remarks at a podium flanked by a pair of parked white trucks. For roughly 20 minutes, Trump and other speakers addressed truck drivers directly, thanking them. “Thank God for truck drivers,” the president repeated during his statements.

One speaker, Charlton Paul, works for UPS Freight in New York and is a leader in the Teamsters Local 707. During his prepared speech, he spoke of driving 606 miles each day and delivering hand sanitizer. Following, Trump presented him with an award, a golden key commemorating his service during the pandemic.

Workers from DHL and FedEx also spoke, expressing thanks to fellow drivers before receiving golden keys during and posing with the president as he passed them their awards. One spoke of receiving thumbs up on the roads and even free meals from thankful citizens.

Truckers faced economic pains from even prior to the pandemic. President Trump’s trade war with China impacted shipping, decreasing freight and causing the trucking industry to decline. When sanctions finally lifted returning trade between the two countries to previous levels, the coronavirus struck.

Watch the video below. The remarks begin at 41 minutes and 48 seconds.

Over 6,000 Commercial Vehicle Drivers Being Forced To Re-Qualify For Medical Examiner’s Certificates… Find Out Why!!