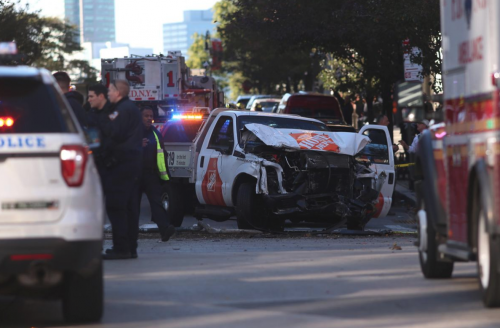 LOWER MANHATTAN, NEW YORK — “He did this in the name of ISIS, and along with the other items recovered at the scene was some notes that further indicate that,” John Miller, deputy commissioner of intelligence and counterterrorism of the NYPD, said this morning of the attack that killed eight. “He appears to have followed almost exactly to a ‘T’ the instructions that ISIS has put out on its social media channels before with instructions to their followers on how to carry out such an attack.”

At least 8 people are dead in what Ne York Mayor Bill de Blasio called a “cowardly act of terror”. A man driving a rental truck struck and killed eight people near the West Side Highway in New York City.

The incident happened Tuesday just after 3 p.m.  on the bike path that runs along the highway in Lower Manhattan.

A suspect, identified as 29-year-old Sayfullo Saipov of Tampa, Florida, is in custody.

A handwritten note in Arabic was reportedly recovered from the scene. Miller said, “The gist of the note was that the Islamic State would endure forever.” He is reported to have screamed “Allahu Akbar”, before being shot in the abdomen by NYPD police officer Ryan Nash. “The suspect was wounded and transported to a hospital”, police said.

“I thought it was Halloween (prank) or something,” said a witness. “I saw the gun running in a circle and I realized it was serious.” 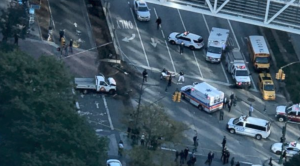 Preliminary reports from city officials said they believe this started as a conflict between two drivers with shots fired.

A man drove his pickup truck down the bike lane on the West Side Highway and ran over multiple people, the truck then crashed into a school bus at Chambers and West, injuring two adults and two children, the witness said. Then adding that the vehicle could not move anymore so the suspect got out and started shooting. A uniformed pole officer confronted the suspect and shot him in the abdomen, said police.

Police also said that 12 were wounded with serious but non-life-threatening injuries.

Saipov was born in Uzbekistan and moved to the United States in 2010.

In 2015, Saipov was interviewed by federal agents because he was listed as a point of contact for two men whose names were entered into the Counterterrorism and Criminal Exploitation Unit’s list after they came to the U.S. from “threat countries,” overstayed their tourist visas and vanished, a federal official told.  Saipov was never the main focus of these investigations and he was never the subject of his own case file.

Investigators searching Saipov’s online activities have found social media links to people who are or were subjects of terror investigations, sources said; however, it appears that the suspect found ISIS propaganda online and was not part of a terror cell.

Saipov entered the U.S. through New York’s JFK Airport in 2010, according to law enforcement sources. He had a green card that allowed him permanent legal residence in the country, sources said.

The green card is a government program called the Diversity Visa Lottery, which hands out about 55,000 visas per year.

After entering the country, Saipov first lived in Ohio before moving to Tampa, Florida. He then moved to Paterson, New Jersey, where he has lived with his wife and three children for several years, according to law enforcement sources. The truck was rented by him at a nearby Home Depot. Also, he worked as an Uber driver.