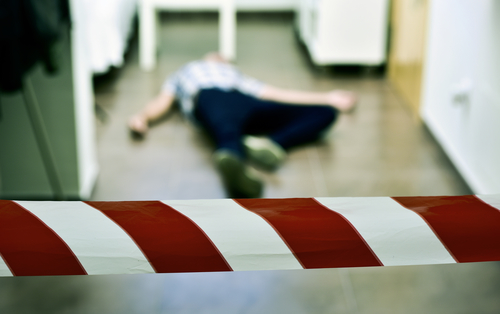 detail of a crime scene with the dead body of a young man lying in the floor indoors, with a red and white police tape in the foreground

On Sunday a family of four from Baytown checked into a resort hotel near the Gulf of Mexico for a one-night stay. However, 10 hours later the hotel where families go to relax and enjoy the beach was the scene of unimaginable violence.

A 37-year-old wife fatally shot her husband and two kids, ages 5 and 10, since they lay in bed in their room, then shot herself in the head.

Officers responding to a report of “pops” coming from the eighth-floor hotel room stated that they heard “faint moaning coming from inside” and the door locked from the inside. They found the four shooting victims upon gaining entry. The father and youngest child were pronounced dead at the scene. The woman and her 10-year-old son were transported to a hospital, where they died early Monday afternoon.

Police released no details on the family and said that they weren’t sure what pressed the shootings. They just said it seemed to be a murder-suicide. Those who attended church with the family told the police that the mother suffered from depression.

Man Died in a Fatal Crash After Hitting a Tree: Investigation is Underway