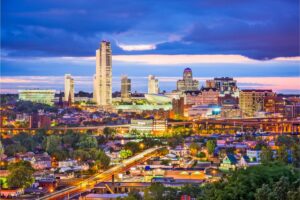 The capital of New York, Albany, is one of the oldest cities in America. It is one of the few remaining British settlements of the original 13 colonies. Once America declared their independence, states and cities slowly incorporated their cities. Albany officially became Albany in 1797, and the city has flourished ever since as the state’s capital. It was even in heavy contention to become the capital of the United States all together. It was already a chief player in world trade, commerce, and transportation. Even today, Albany’s government politics have shaped world-defining movements. In fact, four Albany governors continued on to become President of the United States. This is more than any other state.
Presidents aren’t the only thing made in Albany. Have you ever heard of New York Cheesecake? That’s an Albany original right there, and still the best place to get one. This, along with their famous fish fries, is something that Albany holds dear. Now mix your cheesecake and fish fry in with some Melba Sauce, and you got yourself some Albany delicacy. However, if food and politics aren’t your bag, there’s plenty to see and do in the capital city. Come down every November for the annual Albany Auto Show. One of the many shows around the city.

Relocating to Albany for work? Or maybe you’ve decided to move out of the city to a quieter pace of life? Whatever reason you have for moving, Global Auto Transportation is here to help you! Here at GAT, we’re happy to transport your vehicles safely and efficiently. Our drivers are skilled and safe on the road, so you can rest assured that your vehicle is in the right hands.

We’ll provide you with plenty of options here at GAT, including open car transport as well as enclosed car transport, depending on what suits your individual needs best. We also offer expedited shipping if you need to get to Albany fast!