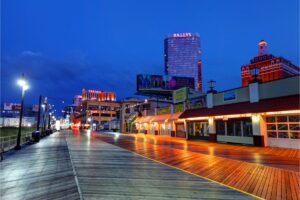 Atlantic City is known as the Vegas of the East Coast. Although gambling didn’t become legal until the 1970’s, it’s always been considered a tourist town. In 1870, Atlantic City opened the very first boardwalk in America, and ever since, people have come to the Jersey Shore city to enjoy all that it has to offer. During the prohibition era, it was one of the few cities that looked the other way. Backroom bars and gambling essentially put Atlantic City on the map. Since then, Atlantic City has shed much of its tough prohibition era persona and has become a great place for a family vacation as well as a bachelor party. The old boardwalk is still there along the beach with plenty to do for all ages. Not to mention fun museums and tours like the Ripley’s Believe it or Not Odditorium.

However, tourists and locals alike enjoy the many events in Atlantic City. The annual Atlantic City Classic Car Show draws thousands of spectators every year. However, if you’re looking to find your own dream car, in August the city hosts the Atlantic City Auction & Car Show, which offers some of the best deals on classic cars as well as exotic and custom vehicles. Unfortunately, many people who come to Atlantic City leave shortly after. The city is declining at a steady rate and is one of the few cities in New Jersey where people aren’t moving to.

If you’re one of the many people moving from Atlantic City, or you want to bring your classic car to the car show, you may need a reputable auto shipping company to help. Global Auto Transportation is here for you. We offer more trailer options than any other company. This means you can ship your daily driver to your new home in another state using an open transport trailer or bring your classic car to the show in a hotshot trailer. Whatever you need, GAT can help. And we ship more than just cars. Even if your boat is in one of the many marinas in Atlantic City, we can ship it too.

Give GAT a call at (888) 803-0501 to get the shipping process started. Or go online for a free quote delivered instantly to your inbox.