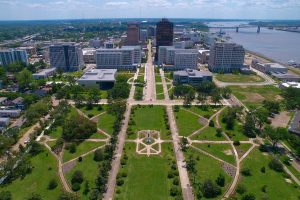 The capitol of Baton Rouge is a diverse playground that’s fifty percent college town and fifty percent big town southern city. Louisiana State University fills most people’s minds when they think of Baton Rouge. Their historic sports program may be what you find on television, but it pales in comparison to its academics. Ranked 12th in the nation, which includes the oldest opera program in America, LSU students are privileged to have a wide variety of subjects to study. But Baton Rouge doesn’t have to be a college town if you don’t want it to be.

The second largest city in Louisiana, Baton Rouge, shares much in common with New Orleans. Amazing food, a spectacular music scene, and distinctive Cajun and Creole cultures result in a city worth living in. If you can’t move in, there are plenty of reasons to visit. The Slam’D & Cam’d Car Show at the Raising Cane’s River Center hosts the largest indoor auto show on the gulf coast. Just twenty minutes outside in Denham, you can find even more car shows like the DOD 2.0 and Mopar’s weekly Meet and Eat every Tuesday. Car lovers don’t let bad traffic and potholes get them down when there’s so much life and love in Baton Rouge.

For students moving to Baton Rouge to enroll in school or car lovers shipping their classic cars to participate in a car show, Global Auto Transportation is here for you. For more than a decade and a half, GAT has helped people in Baton Rouge stay mobile. If you want to ship your daily driver quickly using an open transport trailer or you need the extra safety of enclosed transport for your classic hot rod, GAT has you covered.