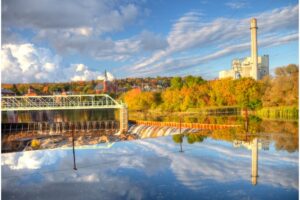 Some call Berlin “The City That Trees Built.” The area was originally used as a mining settlement for Native Americans to harvest rhyolite to be used for arrow points and spears. Eventually, English settlers would develop the land using the resources from the White Mountain National Forest. The city’s borders extend into the forest, which grants the city a mountain feel despite being located under the White Mountain. With so many open forested areas, the town flourishes in mountain and winter activities. It is considered a hockey town and is the hometown of former head coach, Dennis “Red” Gendron, of the New Jersey Devils. However, hockey is only one of the many activities Berlin residents enjoy.

ATVing and off-roading are activities beloved in Berlin. It is even legal to ride an ATV on the main streets of Berlin. Every year the city hosts the Journey to Jericho-ATV Jamboree. This weekend-long extravaganza hosts mud races, demo rides, live music, and delicious food for the ATV enthusiast in all of us. The spectacular ends with a torchlit ATV parade that is a must-see for anyone in the area. Despite all the great things Berlin has to offer, the city is slowly declining in population. Many people choose to move for more job opportunities and the chance to live in a more populated city.

If you’re one of the many people who are moving away from Berlin, you may want a reputable auto shipping company to help. Global Auto Transportation can help. For almost two decades, GAT has helped Berlin residents ship cars all across the United States and Puerto Rico. We offer a wide range of trailers, so we can ship your daily driver on an open transport trailer or your ATV on a flatbed. If you can drive it, we can ship it.

Give us a call at (888) 803-0501 to get the shipping process started. Or go online for a free quote delivered instantly to your inbox today!