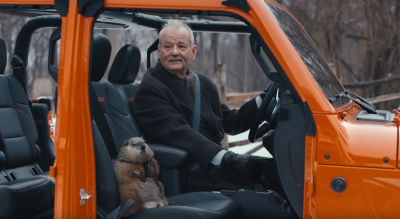 February 3rd – Bill Murray reprises his role as Phil Connors a weatherman from the film “Groundhog Day”. The 1993 film sees Bill reliving the same day over and over again. This time, though, there is something added to his curse.

Reliving The Same Day…but with Style

For those that aren’t aware, the movie Groundhogs day has Bill waking up every day – the same day at 6 am to the song “I Got You, Babe”. He then goes on to relive the same experiences until he makes a change for the better. For the ad, he wakes up, has his same routine, but instead of everything that happens in the movie, there is a new Jeep Gladiator waiting for him.

Bill and Punxsutawney Phil (The Groundhog) go off on countless adventures all while reliving the same day. Instead of Bill reliving each day as a punishment, he ends up having a blast with his groundhog buddy, even going off-roading. Their adventures are countless and it appears that the groundhog likes it too.

It was only too perfect to have this advertisement. With the holiday and the Superbowl on the same day, it was only a matter of time as to who achieved the rights to the film. Turns out, the Jeep manufacturing plant loves Groundhog day, and they wanted the full right to use it. What came next was a superb retelling of the film with the antics of Bill Murray and Punxsutawney Phil.