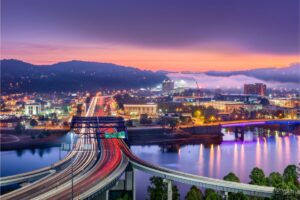 As the capital of West Virginia, Charleston is the cultural and economic hub of the state. It’s also the most populated city in the state. The history of West Virginia goes back all the way to the Civil War, when the western independent farmers did not feel represented alongside the larger plantation slave-owning eastern farmers. The state was split into two, and West Virginia was loyal to the Union. Therefore, West Virginia is home to many Civil War monuments and landmarks. Shortly after the war, Charleston became the first capital of the state. Energy has always been the chief export of West Virginia since coal was discovered to be a cheaper alternative to burning wood. Today, the pressure to switch to alternative energy sources has put a strain on the state’s economy. However, historically, West Virginia has always been ahead of the times and been able to adapt to the future. As the capital of the state, government jobs run rampant in Charleston, and many of the people who come to town are either politicians or lawyers who are eager to change the world.

The other popular reason for moving to Charleston is to go to school. The University of Charleston and West Virginia State University bring new residents every fall. But school and work aren’t all there is to do in Charleston. At the Charleston Coliseum and Convention Center, you can find the West Virginia International Auto Show and see the future of the automobile industry. However, if you’re looking for a more casual car show, check out the Charleston Boulevard Rod Run & Doo Wop show.

If you’re moving to or from Charleston, West Virginia, you may need to find a shipping company to help you move your car. Or, if you need to bring your classic car to a car show, Global Auto Transportation can help. Here, they have more trailer options than any other company and can ship a wide variety of vehicles. GAT ships motorcycles, trucks, RVs, and even boats. If you can drive it, Global Auto Transportation can ship it.