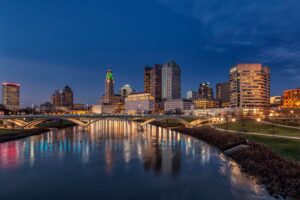 Columbus is not only the capital of Ohio but also the hub of the state. Unlike many other capital cities, Columbus offers all that the state can offer, along with some unique choices you can’t get anywhere else. The most notable landmark in Columbus has to be the college. The Ohio State University holds up the city as one of the city’s premier pillars. Many other schools help build the student population that gives Columbus the feel of a college town, despite that the population overshadows the state college. Even though Columbus is the largest city in Ohio, the town still shuts down every Saturday in the fall to make room for a Buckeyes game. That being said, Columbus still flourishes all year round.

The culture in Columbus is second to none. Downtown Columbus has a flourishing arts district with some of the best restaurants in the Midwest. When you’ve eaten your fill, car enthusiasts have their pick of car shows. Columbus hosts the largest car show in Ohio at the convention center. The Columbus Car Show showcases the next generation of cars coming off the line. However, if classic and custom cars are more your scene, the annual All-Oldsmobile Car Show and Swap Meet is one of the oldest running car shows in Columbus. The Women’s Motor Fest Car Show offers a wide range of vehicles for all tastes if Oldsmobiles aren’t your thing.

Are you a student moving to Columbus for school? Perhaps you’re a classic car owner who needs to bring their car to the car show. For over 16 years, Columbus residents pick Global Auto Transportation to ship their cars anywhere in the United States and Puerto Rico. They offer a wide variety of trailers and door-to-door transport to make the shipping process as easy as making a call.

Call (888) 803-0501 today and get a free quote from one of our friendly agents. GAT can help answer any questions about all of your auto shipping needs!