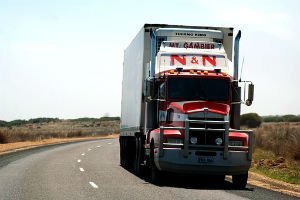 A potential two-front trade war that’s brewing between the U.S. and China and Mexico could dramatically curtail the production of heavy-duty trucks. This grim forecast comes via trucking industry executives and prognosticators. They say if this two-front war is waged it will also chew into corporate profits and have a cooling effect on investment.

Trucking industry insiders are deeply concerned about the overall impact of Donald Trump’s planned 5 percent tax on Mexican imports beginning Monday. In fact, these experts say they’ve already noticed a slowdown from the 25 percent tariff on $200 billion of imports from China that began on June 1.

According to Troy Clarke, chief executive of Navistar International Corp, Mexico is a vital component to our manufacturing footprint at both the supplier level as well as at the assembled truck level. He did note, that with Mexican tariffs yet to be implemented, it’s impossible to gauge the overall effect.

“Quite frankly, we really don’t want to speculate on what the outcomes of that might be,” he said. “But trust us – we’re up to our elbows in some of that analysis as we speak.”

In fact, according to Walter Borst, Navistar’s Chief Financial Officer, the company may lower its earnings projections for the year based on the tariff impacts.

As it pertains to the trucking industry, many of the largest heavy-duty truck manufacturers in the U.S. assemble vehicles or at least acquire parts from Mexico. Now, if Mexico doesn’t act, Trump’s tariff could jump to 25 percent by October.

Certainly, this threat matters to shippers and truck builders in Mexico.

Currently, Navistar manufactures two-thirds of its trucks in Mexico and one-third in the U.S.

Daimler Trucks North America runs a plant in Saltillo that constructs its centerpiece model, the Freightliner Cascadia. Furthermore, it also has a plant in Santiago that puts together the truck. And if that’s not enough, the company has a components-remanufacturing plant in Toluca and a parts distribution center in San Luis Potosi.

Matters get even worse for truck manufacturers when you consider that vehicle components come and go from Mexico as they are turned into finished products. This means that a 5 percent tax could be placed on it each time it crosses.

The Chinese tariffs impact on U.S. trucking are equally devastating. See, trucking is the way foreign imports get moved from West Coast ports in Los Angeles, Long Beach and Oakland. With fewer shipments from China coming in, there are fewer and fewer truckers need to haul those loads.

It’s a messy problem and the outlook is not good. What do you guys think?

This Agency Is Responsible For Trucking Nuclear Bombs Across America Everyday… Why Are They In Trouble?