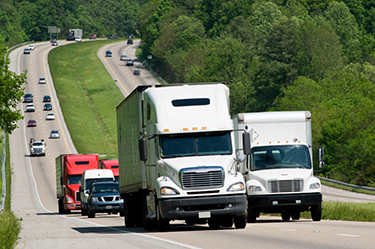 A new proposal made on Friday suggests that devices electronically capping speeds would be installed on new models of American vehicles weighing over 26,000 pounds. A cap can be 60, 65 or 68 mph but it can change. No matter what limit is chosen, drivers would not be physically able to exceed it. Older heavy vehicles would not be required to add the speed-limiting devices, although the agencies are still considering it.

According to the government, capping speeds on newer large vehicles will reduce the number of fatal crashes involving heavy trucks and save $1 billion in fuel costs. Non-professional drivers and safety advocates welcome the changes, but a lot of truckers say that traveling at lower speeds than other vehicles on highways can create dangerous situations.

The first petition for the rule was issued in 2006 by the non-profit organization Roadsafe America that was later joined by the American Trucking Associations, the largest trucking industry group in the US. These groups are dissatisfied with the new rules being applied only to newer trucks and not to the millions of trucks that are already on the road today.

According to NHTSA, installing the new technology on the vehicles made after 1990 can be too expensive with the costs ranging from $100 to $2,000. Some engines would also require changes which would increase the costs even more, and adding the technology to the trucks made before 1990 is not possible.

The agencies say that limiting speeds to 60 mph would save 498 lives per year, to 65 mph – 214 lives, and to 68 mph – 96 lives. But according to the Owner Operator Independent Drivers Association these limits can create dangerous interactions with the cars that slow down for large trucks.

Another reason for such changes is that in 14 states the speed limits for big rigs are higher than or equal to what their tires are designed to handle.

The agencies will take public comment for 60 days, and then decide if the changes should take place and determine the final limit.

California Driven to Get More Electric Vehicles on the Road

A Battery Fire on Tesla? See What Firefighters Do to Extinguish the Flame