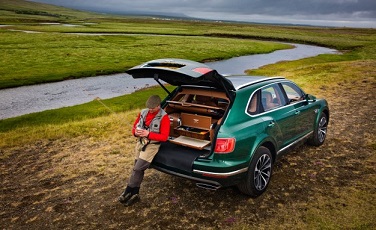 For the most part, it is the same as Bentayga. It has the same Continental kind of exterior (that looks great in dark green) and comes with W12 powerplant with 608hp. The real difference can be found inside, and that is what makes the Mulliner a dream car for fishing enthusiasts.

The boot is fully waterproof and dehumidified, and equipped with four fishing roads trimmed in saddle leather, and two landing nets in the pocket to the side. There are also three units: a refreshment case, a master tackle station and a waterproof storage case. In the refreshment case you will find three flasks, exquisite china tableware (no, it is not a joke) and a storage compartment for food.

What can make a fishing fan really excited is the master tackle station. There are various tools and a fly-tying vice in a Burr Walnut veneered drawer, as well as feathers, hooks and cotton. It is also equipped with aluminum reel cases. Also included are rear sill protection covers. When you are not planning fishing and need full luggage space, all the fishing trips equipment can be removed.

Another addition Fly Fishing by Mulliner has is welcome lights that project Mulliner and Bentley logos on the ground. They will also be available on the original Bantayga.

The price for the new Bentley Bentayga has not been named yet. We can only guess what it is going to cost, as well as what other special editions Bentley will come up with. Maybe, the time will come for golf lovers to get their own special kind of Bentley?..

California is Number One in an Electric Vehicle Future