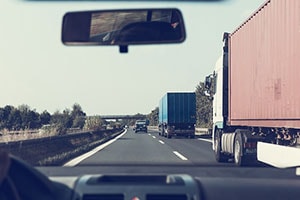 GRANGER, IN – Last fall, Governor Eric Holcomb made the announcement about a toll increase on the Indiana Toll Road. The plan? For rates to go up… but only for big trucks. So, while the news didn’t have a big impact on every day drivers, it did for the trucking industry.

The 35% spike implemented on October 5, 2018 was a big jump for them. And, not surprisingly, the industry is not happy about it. Now, truckers are fighting back.

As a result, on Wednesday, the national Owner-Operator Independent Drivers Association (OOIDA) filed a lawsuit. The class action complaint is against Holcomb, Indiana Finance Authority, Indiana Toll Road Concession Company, as well as the commissioner of the Indiana Department of Transportation.

They filed this complaint in the US District Court in Indianapolis. And, the basis of the lawsuit challenges the toll increase on big trucks and heavy vehicles. The trucking industry believes they are being unfairly targeted against.

As the president of OOIDA, Todd Spencer, stated, the toll increase “targets trucks disproportionately to contribute to revenues within the state that have nothing to do with the road itself. Clearly, this action is completely discriminatory to trucks. They’ve made their intentions clear in that they are looking for out-of-state trucks to provide a disproportionate share of revenues to the state in what we believe is a clear violation of the Commerce Clause.”

Essentially – they aren’t happy. And the trucking industry believes that the toll increase unfairly targets the industry by using truckers to pay for state-based funds not even related to roadwork and construction.

Meaning… truckers need to cough up the money and won’t see any benefit of it on the actual roads. Spencer’s response to this unfair toll increase? “Truckers are not rolling piggy banks.” Time will tell if the lawsuit manages to overturn the toll increase on Indiana Toll Road.

Bed Bath & Beyond Exchanging Toys R Us eGift Cards: What is the Deadline?