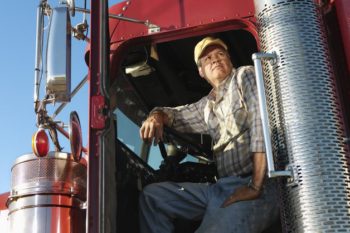 What is it like to be a trucker nowadays? A truck driver used to be a close to middle class job and a promise of freedom, but what has it become?

Imagine you are an owner operator. You have worked hard to save money and buy your own truck. You know it means sacrificing some of stability but you want to be able to choose when you want to work. But what you have got instead is all kinds of regulations telling you what to do and how to do that. Also you have to pay for your truck insurance, all the repairs and then because of the low pay you can find yourself in a situation when you can’t even pay for your health insurance. Additionally, because you are over the road most of the time, you are not present at home, which can lead to problems with your spouse. So much to go through and for what? So-called freedom? No wonder truckers go on strikes every now and then.

For trucking companies it is a great deal to hire owner operators. They don’t get workers compensation like employees do, or Social Security contributions, as well as protection from health and safety regulations. Companies prefer classify all the workers they can as independent contractors to avoid taxes.

The situation is at its worst in the ports. Unionized truck drivers used to make good money, but in the 80s Congress deregulated the industry, and the majority of the port truck drivers became independent contractors. Today being “independent” in the trucking industry means that you get paid less. On average they make $28,000 per year. Employee drivers make $7,000 more and get better benefits.

In the last 30 years things have been getting worse and worse for port truck drivers. They spend hours in ports waiting in lines to get back on the road, and they are not paid for the time they waste. Many reasons can be found for why it is happening. According to the Teamsters, who used to represent all the port truckers, one of the main reasons is that workforce is not paid for its time and the delays don’t cost the shipper anything.

Probably, a lot of independent contractors should not be classified as such. The majority of trucking companies don’t let owner operators work for other companies. Moreover, they tell those drivers how the job must be done. In many cases contractors could really be qualified as employees being dictated like this.

What may solve the problem is to see every driver as an employee unless the company can prove otherwise, but this measure met a lot of opposition from the industry, as well as drivers themselves. Many of them are not ready to lose their independence and don’t want to feel like being employed with a company is forced on them.

And so the problem remains. There are weeks when owner operators get nothing because they have spent too much time in lines or the gas prices have increased dramatically. The industry is going through the rough times as well. There is a huge shortage of truck drivers, because many leave after more and more regulations have been pushed on them, and not so many people are willing to start a career in the industry which promises freedom but seems to forget the true meaning of the word.